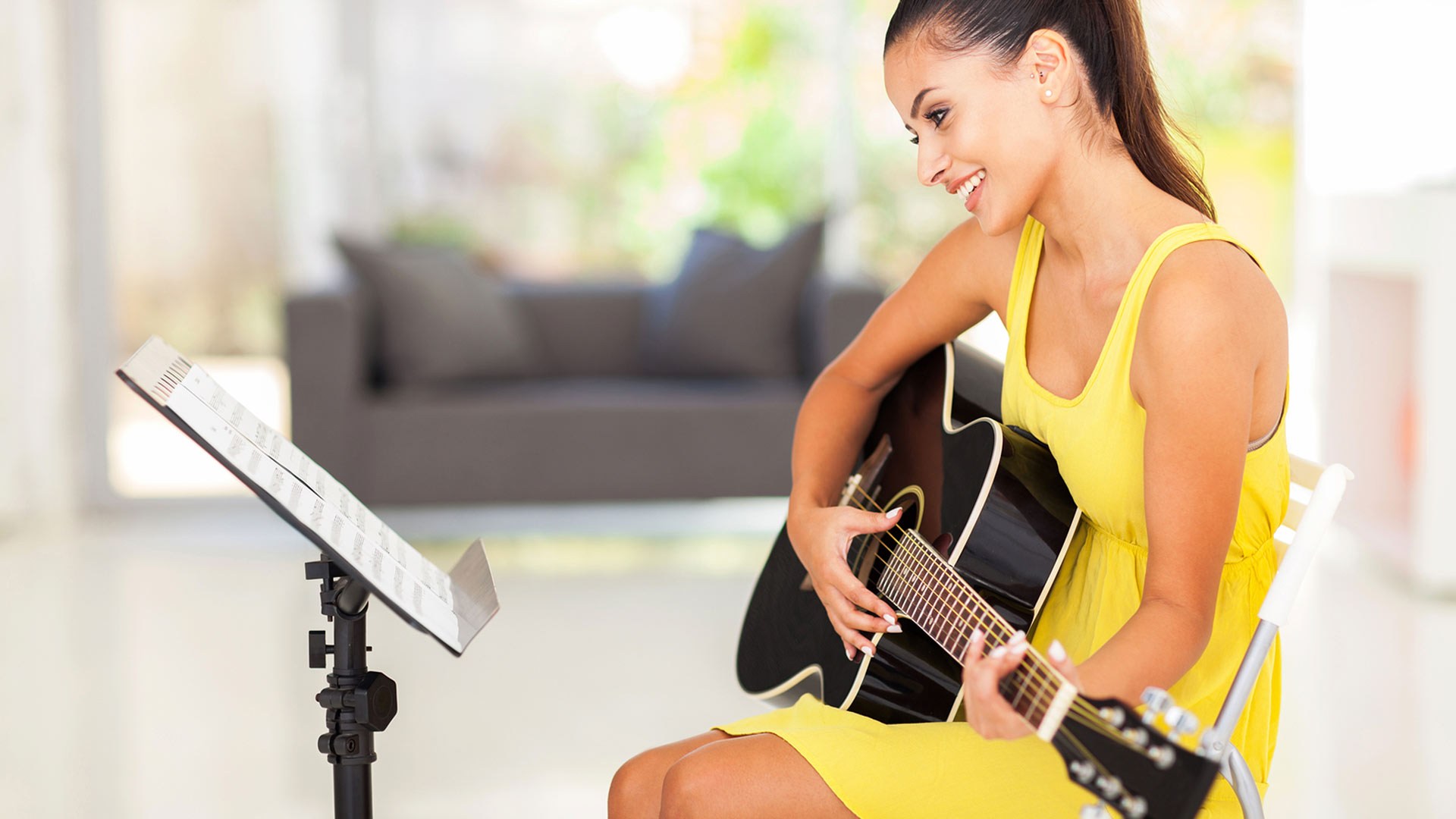 One of the most popular instruments in the western tradition, the guitar was originally intended as a
portable substitute for the piano, easily carried and moved, but providing the ability to produce an
accompanying harmony using chords. An incredibly flexible instrument from its inception, a player can
sing while playing, allowing a musician to accompany himself, while being free to move around. This
portability makes guitar the ultimate campfire instrument. In addition, the guitar can be used to
interpret written music, tablature, or chord symbols and diagrams, allowing incredible flexibility in a
wide range of situations. This flexibility has resulted in a wide proliferation of the guitar in modern
popular music, and as a result, the guitar is used in almost every style of music today.
The six strings of the guitar allow for multiple notes to sound at the same time, making this highly
portable instrument an ideal member of the rhythm section. The physical layout allows for a very visual
understanding of music, and easily demonstrates the similarities of different keys, promoting a powerful
understanding of music theory based on shapes.

The guitar was not the first fretted stringed instrument invented. The lute, the vihuela, and the guitern
all existed prior to the guitar, and contributed to the technological development of the acoustic guitar.
Acoustic guitars today come in three main varieties. The standard steel-string acoustic guitar is the most
popular in use today, used in a wide variety of styles and genres. Nylon stringed classical style guitars
are used most frequently in the performance of classical music, and with slight variations, also flamenco
guitar. The third variety, the archtop guitar, comes in both acoustic and electric varieties, and is quite
popular in the jazz and blues guitar traditions.

The electric guitar was invented in the early 1930’s, and quickly changed the face of guitar playing and
its place in modern music forever. With the electric guitar came the amplifier, which allowed the guitar
to solo over a large group while still being clearly heard. The guitar was instrumental in the
development of early rock and roll, helping to shape the style and sound as it developed as a distinctly
different style from rhythm and blues. Along with amplification came many different effects which
could be used to alter the sound of the amplified instrument, allowing the guitar to produce a wider
range of sounds than most other instruments, and further cement its place as one of the most
influential instruments in modern music. As the guitar rose in prominence, it continued to develop the
technology of the instrument itself, the effects, and the amplification, as well as the techniques used by
the players themselves.

The highly trained instructors here at Rocky Mountain Academy of Music can do more than just show
you a few chords and teach you a couple rock songs. Our teachers can help you understand the
fundamentals of your instrument, give you a thorough understanding of music theory, and help you to
understand the rich tapestry of music history, leading to a fuller, deeper understanding of your place in
music.